In a move that many of us did not see coming, famed French actor Vincent Cassel – renowned for his subtle villanous performances, and for being the son of the “French Fred Astaire” Jean-Pierre Cassel – married for the second time this weekend, at the age of 52. Five years after his split with the Italian model and actress Monica Bellucci, Cassel married the French model Tina Kunakey, 21, in an intimate ceremony at the French resort of Biarritz, 500 miles from Paris.

Rumours of an engagement began last year when Kunakey was spotted wearing a large diamond ring, but reports have always gone unconfirmed. The two have been dating since 2016, when they allegedly met on holiday in Ibiza. The details of their relationship had been shrouded in secrecy until they featured on the front cover of the most recent edition of Vanity Fair Italia, and discussed their relationship and some of the controveries around it – the age gap is an elephant in the room to be sure!

Tina Kunakey is a rising star in the French modelling industry, and is mere steps away from dominating some of the most prestigious catwalks in the world. She was born in Toulouse, growing up in the area where her and Cassel’s wedding was held this weekend, and said she had no idea who he was then they first started dating! On the big day, she wore a dazzling white custom Vera Wang dress with a sweetheart neckline which accentuated her curves and showed off just why she is one of the most popular up and coming models! Cassel also wore tailored Vera Wang, mirroring the white that Kunakey chose. And they certainly look very charming together! 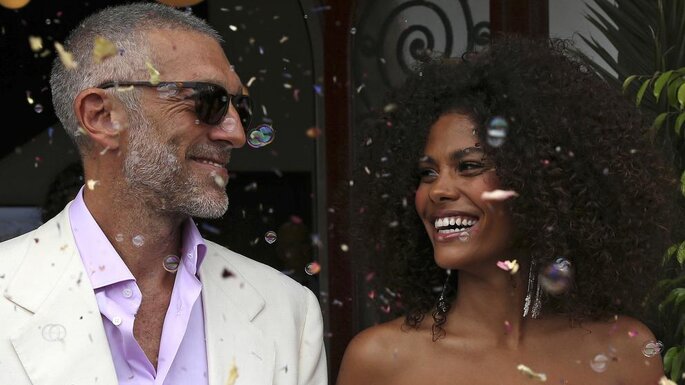 The couple have had to overcome many battles together due to the intense pressure of the media on their relationship. Indeed, in a recent interview with Vogue Magazine, Cassel acknowledged that it is unfair that he is able at 52 to restart his life – an opportunity that many women do not have. The French actor – famous for his roles in the classic films Ocean’s 12 and Black Swan – also joked about their age gap on a post on his Instagram page, captioning a photo of the two of them with “le Fœtus et le Fossile“! However, we applaud their decision to make their relationship official in spite of the criticism – and with Cassel’s claim that “we are going to make babies”, we can see it lasting for a long time!

We wish this couple the very best of luck in their future, and hope that their lives together are as happy as their wedding day. Congratulations!