Planet Earth is home to endless romantic destinations that are capable of amazing every visitor. Its sheer size houses all kinds of environments, from incredible landscapes to unusual constructions, and the essence of each space really is unique.

Love is, at times, the brushstroke that fills life’s palette of colors, adding a touch of magic to diverse cities. If you are in love, have a read of this article and explore the world’s most romantic cities with your loved one.

Paris really is the city of love. It’s also the City of Light, both for its glittering skyline and for being the first city to provide electric street lights. In this sense, Paris is also full of artistic wonders, with a long and rich artistic history and the incredible names and works hosted in its museums and exhibition halls such as the infamous Louvre.

Paris owes its romantic character to the perfect combination of class, culture, architecture, cuisine and bohemian touches. This mixture ranges from wide avenues and narrow streets full of charm and accordion sound; of beautiful historical compositions (Basilica of Sacre Coeur) and avant-garde buildings (Pompidou); of sophisticated works in classical theaters and daring shows in the Moulin Rouge; and of luxurious restaurants and a good handful of secluded cafés. Your journeys along the Seine, up the Eiffel Tower, and through Paris’s streets (particularly the Montmartre district), with the memory of classic and experimental artists decorating its past, present and future, will make for the most romantic of city breaks. Discover an effortless blend of the classic and contemporary. 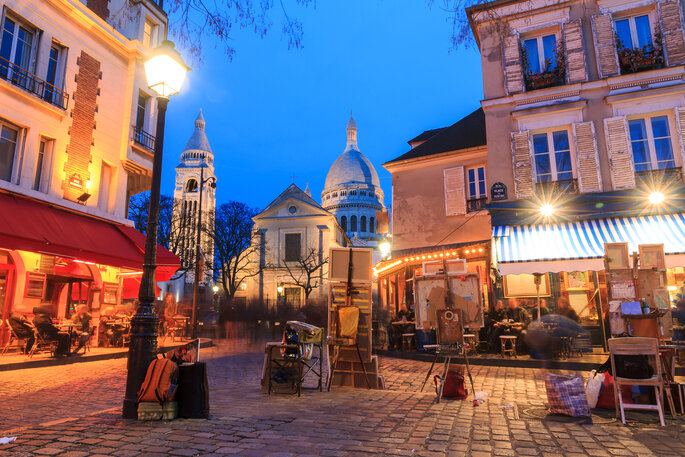 Bruges is one of the jewels of Belgium and Europe, a small city full of fantasy, culture, old stories and fairytale beauty. Choose a personalised and hand-crafted honeymoon trip or romantic getaway, and you can discover all the corners of this city at your own pace. Honoring its original name (Bryggia = Brugge = bridges), the city is a conglomerate of stone bridges in remote places, small streets and large spaces. Its natural elements flourish through landscaped gardens and parks with emerald green grass, communicating perfectly with its architectural wonders, which stand out on the roofs of witches’ houses and the reddish tone of its exposed brick. You’ll feel as though you’re entering your very own fairytale love story as you wander these cobbled streets. 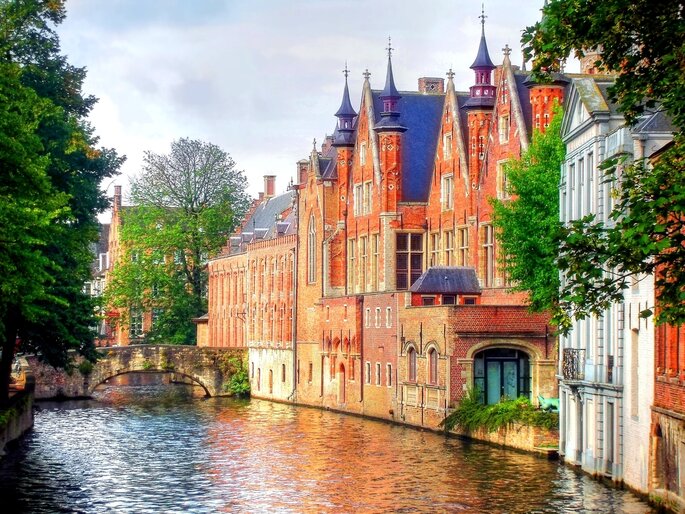 Like good wine, Kyoto is one of the best preserved cities in Japan, perhaps because it went untouched in World War II by American planes. Today, the city is composed of 19th Century buildings that represent Japanese mythical culture while also adapting to the style of the present. It’s a large town with all the the peculiarities of small and charming cities. In addition, it combines its excellent urban panorama with the beauty of its landscape rich in autumnal colors, with Japanese cherry blossoms decorating the city’s gardens in Spring. Its beautiful and mystical temples that are also part of the Historical Monuments of Ancient Kyoto were declared a World Heritage Site by Unesco. 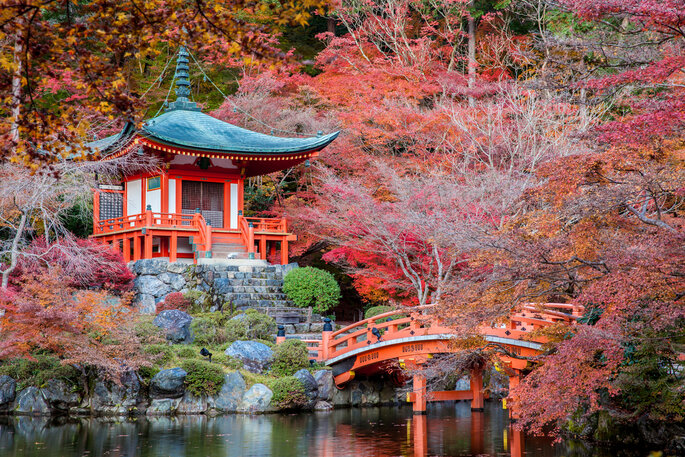 A great city known for its artistic character. Italy is the cradle of classical art, with the Renaissance as the driving aesthetic of Florence. Here, incredible artists such as Leonardo da Vinci, Boticelli and Michelangelo are the notable geniuses of painting, architecture and sculpture. The Uffizi Gallery is a great spot to get a taste for the art that breathes through this city.

The streets of Florence themselves are works of art, preserved with care, and many national treasures can be found such as as the Ponte Vecchio, one of the most charming bridges on the continent. Merchants still gather there to trade, and the waterside still maintains the hustle and bustle of past centuries. The Cathedral of Santa María del Fiore is another gift for the eyes, the true star of the city that reaches the sky with a glistening white color, like a hundred-year-old bride about to say “I do”. You can find all of this and more in Florence, the heart of Tuscany, most definitely the most romantic city of the Mediterranean. 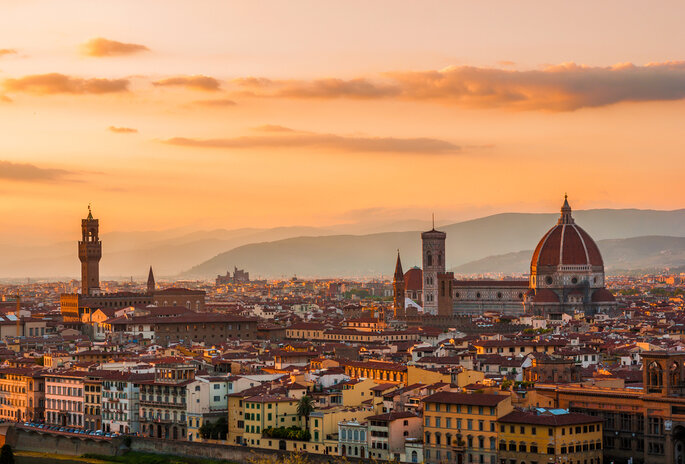 The Alhambra Palace is the focal point that makes Granada one of Spain’s most popular destinations. Strolling the Palace’s gardens and streets is a true return to the Middle Ages, when the national territory was still known as Al-Ándalus. However, even without the Alhambra, Grenada would still dazzle its visitors with its incomparable charm. There you can witness incredible sunsets from viewpoints such as San Nicolás, and enjoy romantic dinners in exceptional spots such as in the terraces of Campo del Príncipe.

The streets of the Realejo, an old Jewish quarter, are adorned with white Andalusian architecture, and contrast with the colors that nourishe the Alcaicería, which feels like a trip to Morocco. The Albaicín is one of the highest points of the city, one of the neighborhoods that maintains an essence if the hippie era, with the Alhambra and Sierra Nevada as a backdrop. 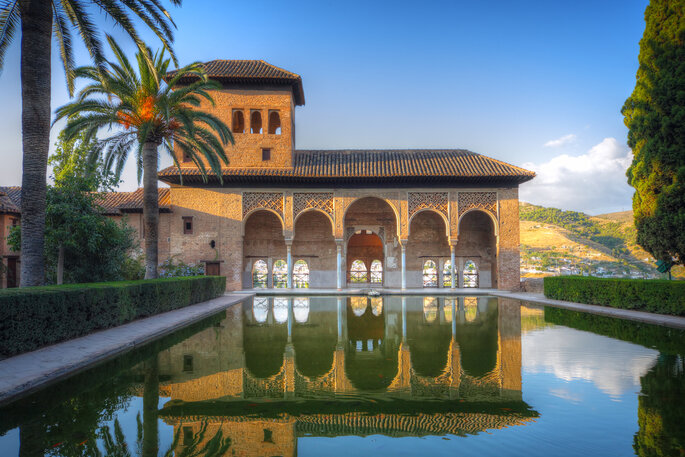 There’s nowhere in the world quite like Amsterdam. The capital of the Netherlands is synonymous with culture, tolerance (welcoming a large gay community), good taste and charm; an artistic center that is completely populated with bicycles, one of the country’s national symbols. The city is known as the “Venice of the North” because of its innumerable channels, combined with picturesque bridges that are populated by both residents and tourists.

Amsterdam is divided into several neighborhoods, but it is the old area that makes anyone who has a heart fall in love. Its eighteenth-century houses decorate the landscape of the city, rows that mix warm and black colors and arrange themselves chaotically with authentic charm. In its streets, flooded with that magic characteristic of eighteenth-century Europe, art galleries are mixed with hipster coffee shops, and antique shops with breweries. Museumplein is the home of Amsterdam’s fantastic museums, with the recently reformed Rijksmuseum as a must-see; and the Red Light District is, of course, an intrigue to many visitors. Throughout its streets, Amsterdam has an enchanting and friendly atmosphere that is incomparable to anywhere else. 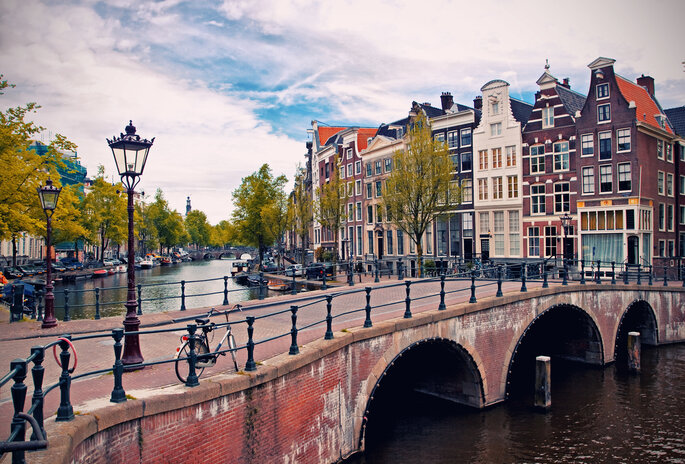 Manhattan is the heart of one of the most important cities in the world. From the populated Midtown, with Times Square as a bustling hub, to the Village with its typically New-York-style buildings; from the skyscrapers that surround Fifth Avenue and the World Trade Center to the elegance of the Upper West Side and East Side. Brooklyn Bridge and Central Park are two of its most romantic places for a stroll, and there are many famous jazz venues (Blue Note Jazz Club) to spend a lively evening. This city is wonderful for the eclectic mix of environments and cinema spaces that arise in every corner, as well as having lush green corners such as Bryant Park, Madison Square Park or Washington Square. LittleItaly and Chinatown are not such romantic places per se, but any visit to New York requires a look at every spot that makes up the city’s diverse blend of cultures. 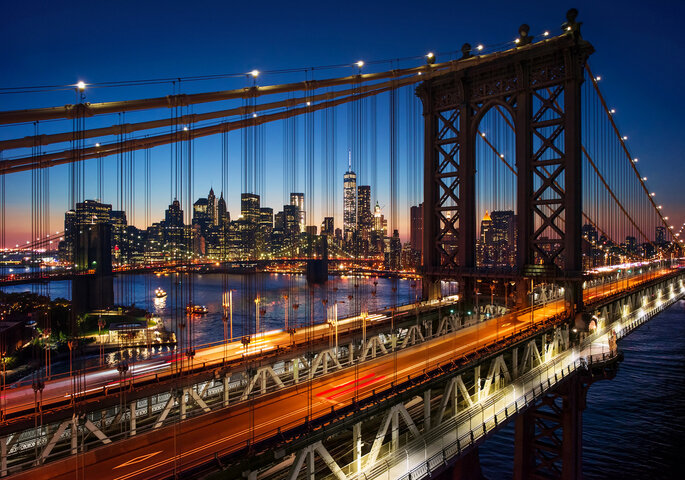 Another fairytale city where the beauty of its buildings and streets predominate. The pointy roofs are Zurich’s hallmark, very representative of the most beautiful and authentic essence of Europe. As one of the main cities in Switzerland, the city lives up to the country’s philosophy: wellness, beauty and cleanliness. Its wide spaces lined with bridges act as a counterpoint to the narrow streets full of charming bars, medieval-style windows and hidden plazas. At night, the visual spectacle of lights and colors is breathtaking and incredibly romantic. 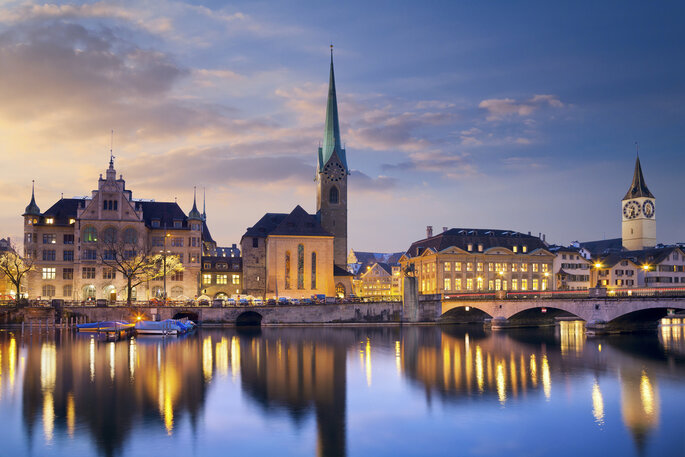 Named in 1985 as Historical, Artistic and Cultural Heritage of Humanity by UNESCO, Cartagena boasts a cultural and tourist variety, with accommodation and luxury restaurants colliding happily with the colonial architecture of the city, a historical gift for its visitors. Cartagena adorns its buildings with a colorful palette of colors that adds a special beauty to the romantic streets of the city. Some places to see are the Cartagena Walls, the Plaza de la Aduana and the Palace of the Inquisition. 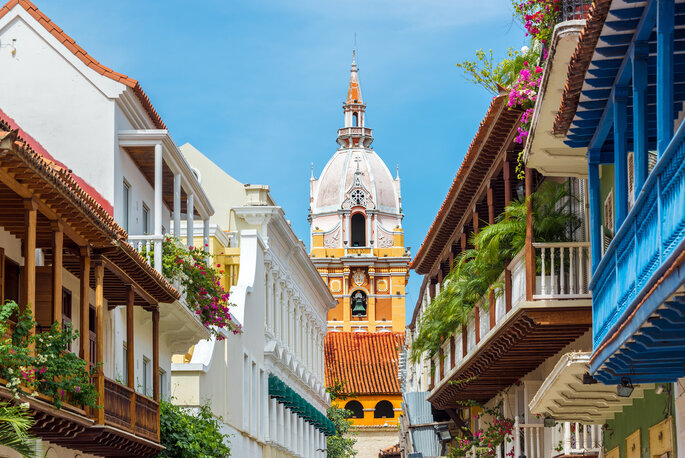 Another trip to the bohemian era, where artists have continuously looked for inspiration. Ideal as a setting for fantastical novels, the magic of Prague goes far beyond its famous Astronomical Clock. The Old Town Square is a wonder of medieval courtship, beautiful both in its form, by the row of period houses and the mix of Gothic and Baroque, and in its background, open to food markets, shows and the feeling of attending any medieval joust at any time. The Charles Bridge is one of the most romantic in the world, both for the views that are drawn from its surface and for the pleasure of walking on the Vltava river. Prague is a unique way to make memories with your beloved. 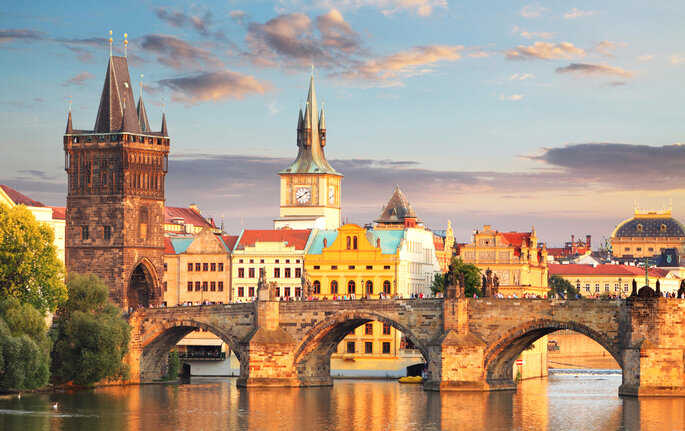 Choose one of these magical cities and enjoy the most romantic holiday. All of them make for perfect honeymoon/mini-moon destinations, or an amazing way to spend your engagement or anniversary.