Universally lauded as the most romantic country on earth, there is perhaps no place more perfect to tie the knot and celebrate love than France. People’s minds often immediately jump to the glitz and glamor of Paris, but France is a country of surprising variety, with an endless number of stunning regions just waiting to be discovered.

Travel down the west coast and you’ll come to the port city of Bordeaux. Many will be aware of Bordeaux as an exporter of some of the finest wines of the world, but, alcohol aside, foreigners’ knowledge of the city and its surrounding areas tends to be limited at best.

Luckily for us, Bordeaux-born-and-bred Alexandra Habemont, who also happens to be the founder of wedding planning service Once Upon A Time, has compiled a list of some of the most desirable wedding venues Bordeaux and the wider Nouvelle-Aquitaine region have to offer. 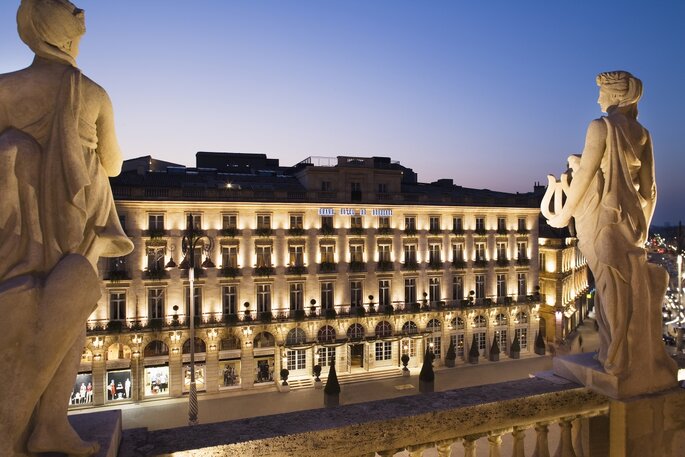 Situated in the quartier des Grands Hommes, the heart of Bordeaux’s historical center, this hotel is perfect for couples seeking an elegant and metropolitan venue. Le Grand Hotel was designed by revered architect Victor Louis in the eighteenth century, and was built with the excessive splendor which was so emblematic of the period, and which remains just as striking today. 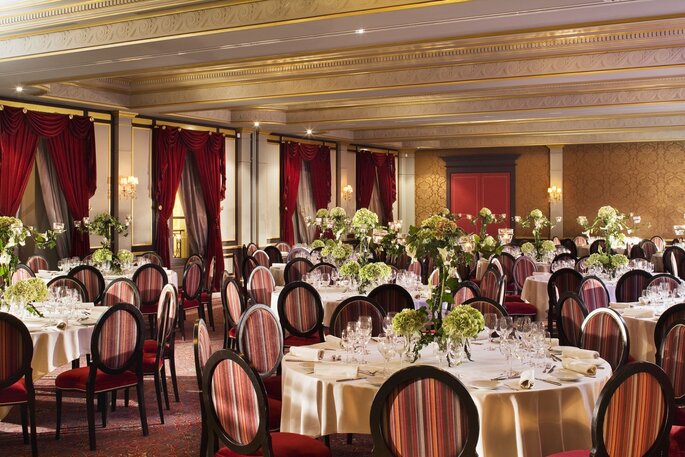 The hotel’s interior is just as opulent. Couples have the opportunity to celebrate their nuptials in the lavish Sauternes meeting room, dating back to 1907. The same level of extravagance is evident in the services provided by the hotel, which include Gordon Ramsay’s Michelin-starred restaurant The Pressior d’Argent, world-class sommeliers on hand to advise wedding menu wine pairings, and a spa comprising ten treatment rooms. 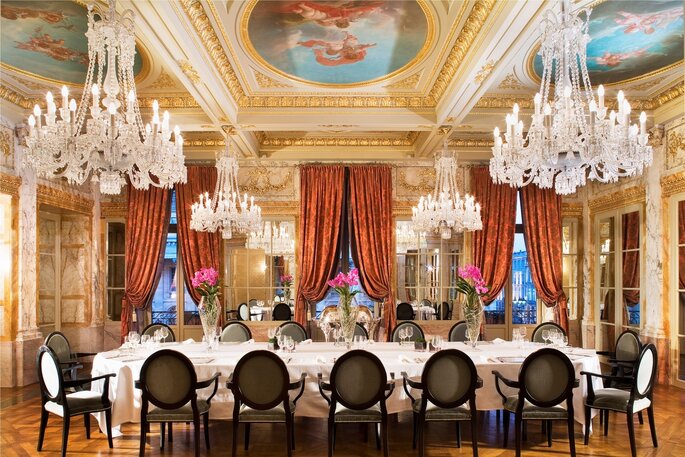 If you’re thinking that this château’s name rings a bell, you’d be right – world-renowned wine has been produced here for centuries, with sources documenting grapes first being planted by the noble Bosq family as early as 1365. The estate has changed hands a number of times over the years – previous owners include Scotsman George Smith (which explains the distinctly un-Gallic third of its name) and the Mayor of Bordeaux, both of whom ensured that the prestigious reputation enjoyed by the château and its produce was preserved. 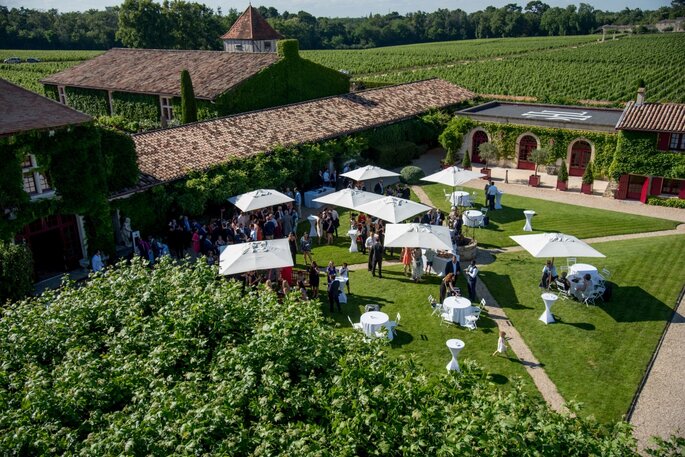 The estate is capable of catering to wedding parties of varying sizes, and can accommodate up to 300 guests. A number of halls and salons are at your disposal, with the Cantlelys Hall remaining the most impressive. This space is one which will truly transport you and your guests back in time, boasting period features such as a Renaissance chimney, original 12th century exposed beams, and a grand stone staircase. 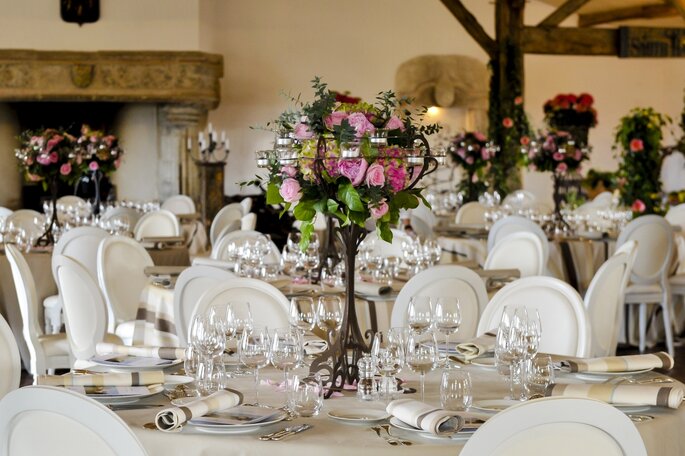 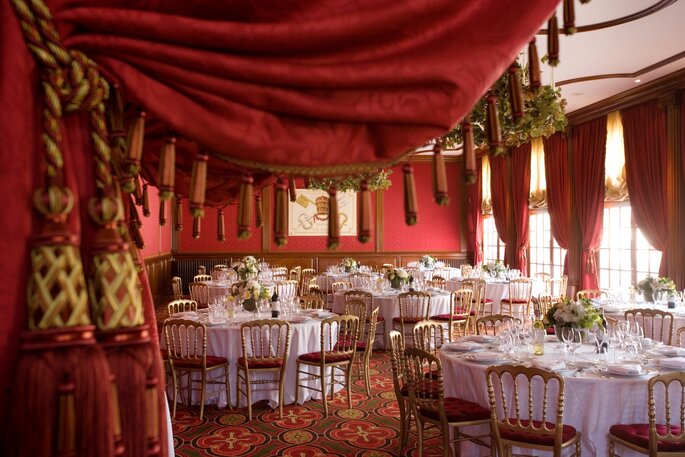 Again, a dream venue for oenophiles and history buffs alike, Château Pape Clement is the oldest wine estate in Bordeaux, and celebrated harvesting its 700th vintage in 2006. The estate’s name is derived from its original owner, Bertrand de Goth, who was elected Pope in 1306 and took the name “Clement”. You’d be hard-pressed to find another venue steeped in as much rich history as this. 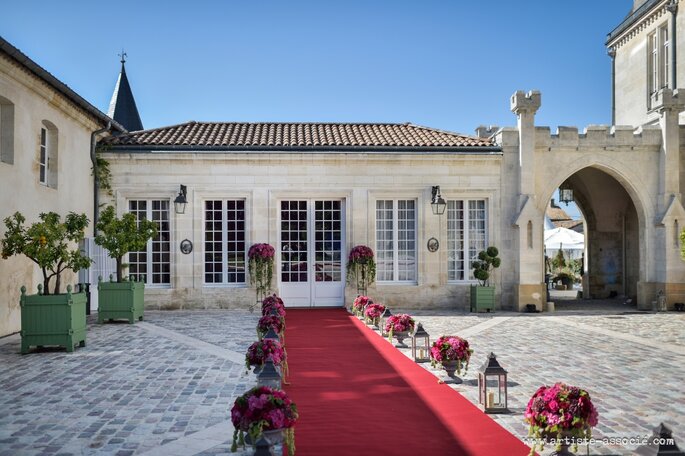 Its suitability as a wedding venue is certainly not compromised by its age. Only 15 minutes from Bordeaux, but surrounded by 60 hectares of vineyards, you really do get the best of both worlds. The estate also blends a number of architecture styles, leaving it up to the bride and groom to decide whether they’d rather say “I do” in the intriguing neo-gothic surroundings of the château, or if they’d prefer to opt for the decorative glass pavilion in the garden, designed by none other than Gustave Eiffel. 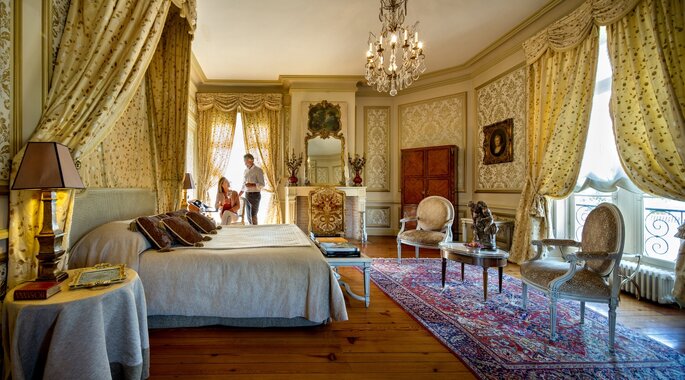 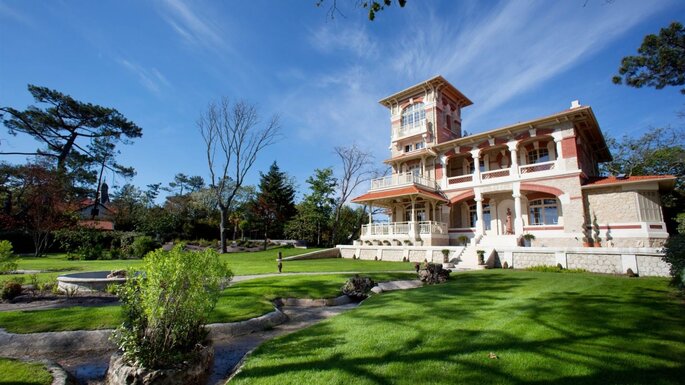 Positively modern in comparison to the other venues on this list, Villa La Tosca was constructed in 1903, blending both French and Italian architectural influences. The villa caters for smaller, more intimate wedding parties, making it the perfect venue for couples seeking a low-key affair, without forgoing any of the French elegance abundant in the region. 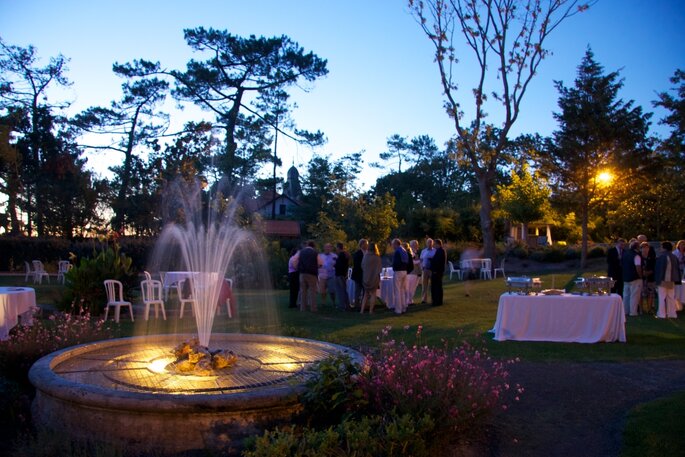 The main selling point of Villa La Tosca may well be its paradisiacal setting. Located in the Bay of Arcachon, the villa is concealed by pine forest on one side, and exposed to the sea on the other. This makes marrying your dreams of a beach ceremony and a lavish European soirée a piece of cake! 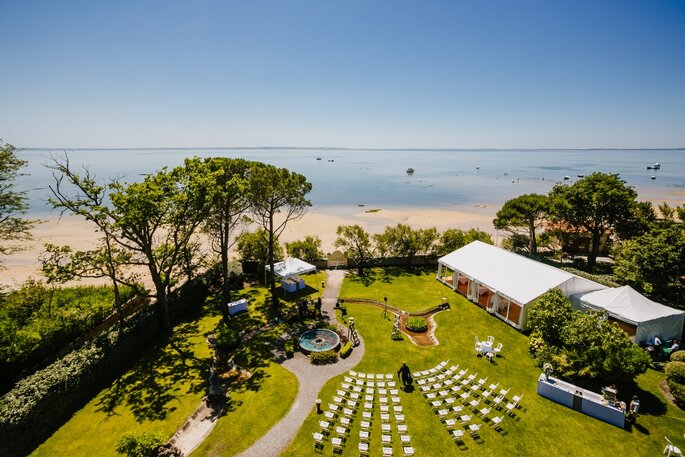 Another château which enjoys a very regal history, Cazeneuve has been home to the likes of Henry IV, and is still inhabited by the Sabran-Pontevès, a Ducal family. The estate is made up of a number of styles, ranging from its medieval cellars (in which you can find – you guessed it – an impressive range of bottles of Bordeaux) to the Renaissance architecture of the main château building. The lower yard even plays host to troglodyte caves, sure to fascinate any guests with a penchant for spelunking! 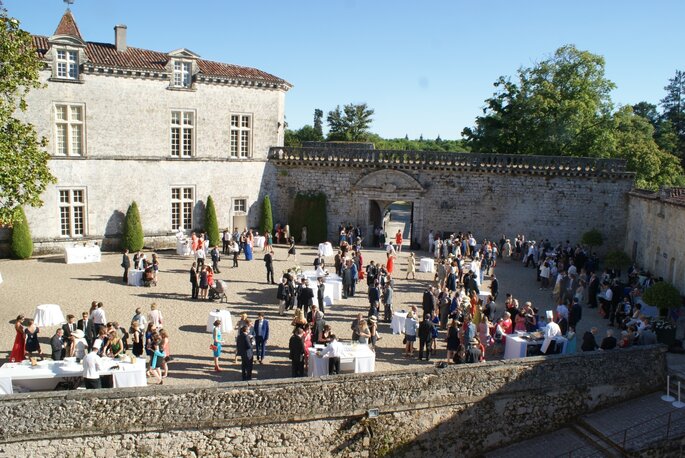 Newly-weds and guests alike will be able to celebrate the day (and night) within the castle walls. Cocktail receptions are held in the large courtyard, dinner takes place in vast halls complete with vaulted ceilings and stone fireplaces, and you’ll be able to dance the night away in the guard room.

There you have it – Alexandra’s picks of the most awe-inspiring venues this region has to offer. Come for the wine, stay for the opulent architecture and stunning natural beauty. Still hesitant to take the leap across the Atlantic? Contact Once Upon A Time for all you need to know about arranging un mariage bordelais!

Discover the magic of the Apulian tradition in a unique wedding location: Masseria Grieco

Destination weddings
Mar 26, 2020
The beauty of getting married in an ancient Apulian farmhouse: discover the great beauty of the Italian boot at Masseria Grieco.

Villa Andrea di Isernia: because celebrating ritual and reception in the same location is "good and right"

Destination weddings
Mar 25, 2020
Celebrating the ritual in the same location as the reception is the dream of many couples: in this location all this is possible thanks to the staff and exclusive environment

With Love from Italy: the World's most romantic wedding destinations

Destination weddings
Mar 22, 2020
Romance is synonymous with Italy. Get married in a stunning castle by the lakes, in Romeo and Juliet syle buildings of Verona or by the breathtaking Amalfi Coast. Its easier than you think, so what are you waiting for?

My Wedding in Provence: Design Your Fairytale Wedding In The South of France

Riva Degli Etruschi: The Perfect Mix Of Nature, Sea and Tuscan Beauty For Your Wedding Day!

Destination weddings
Mar 19, 2020
Your partner and you will get everything you wish for when you wake up the first day after the wedding. The spots give you the excellent opportunity of enjoying nature, sea and your lovely new partner.

Vis a Vis Wedding & Events Creates The Chorography of Your Dreams

Destination weddings
Mar 18, 2020
Behind the scenes, the Vis a Vis Wedding & Event team presents you with a unique and memorable show, where you will be the protagonists...

15 Reasons Why You Should Get Married Abroad

Destination weddings
Mar 17, 2020
There are now more reasons than ever to jet off somewhere beautiful for a destination wedding. Be persuaded by our 15 reasons to get married anywhere abroad, from a stunning city to a breath-taking beach!

Destination weddings
Mar 15, 2020
At this stunning destination wedding venue, you and your awe-inspired guests will feel the sea breeze of the Mediterranean as you celebrate a flawlessly planned day, and indulge in delicious Italian cuisine.