We assume that you must have heard this popular term being used throughout 2016.  The presence of the millennial generation continues to be felt in full force, both on social media and through alternative means of communication. Being the most talked about generation, we felt it appropriate to reveal all the information we know about the millennial age. Read up on everything we’ve written about (as it’s most likely to be from your very own generation.) 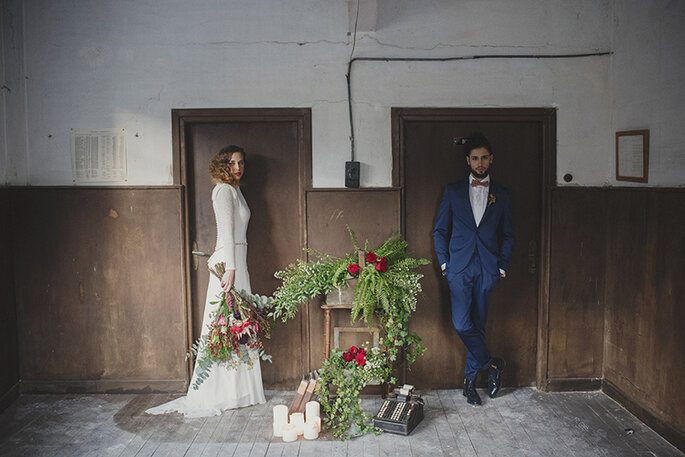 There has not been any confirmed date for the years that encompass the millennial generation, however from the beginning of the 80s to the end of the 90s are generally thought to be the approximate periods of time- some even include part of the noughties! Best known as the millenials, they have also acquired nicknames such as Generation Y, Generation ME and the Echo Boomers. Likewise this generation has also been associated with terms such as the “Peter Pan” effect as they represent an age of fun loving people determined to delay the transition from teen to adult for as long as humanly possible. They really lived out their youth to the full.

However what this generation lacks in responsibility, they don’t lack in intelligibility as almost all have attended university. Thus, adult life was started out at the ripe age of 23, meaning this generation kick started the trend of getting married later than previous generations. Not to mention the difficult economic situation that has been impinging on society in recent years, forcing couples to delay marriage, children etc. until financial security is formalized. Everything seems to take that little bit extra.

A major feature of the millennial generation is of course the effect of technological development. Like our current youths, they are also glued to their phones and computers and are fervent users of the Internet. Likewise, their common uses of the Internet include watching tv, video streaming, and of course online shopping! Even traditional taste in music and TV changed, switching from soap operas and rock music to film and pop culture. With their easygoing and hippy vibe, they care about nature and enjoy the little things in life.

A few more things: They love music festivals, smoke less, drink less and focus on living a healthy and happy life. Furthermore, they were the first promoters of organic foods. In terms of style, they love anything alternative and refuse to conform to the trends dictated by the fashion industry. Experimental and interesting, their style serves to mirror their personality. Moreover, art, galleries, and photography are their main sources of inspiration. And just like that we’ve summarized the millennial age! 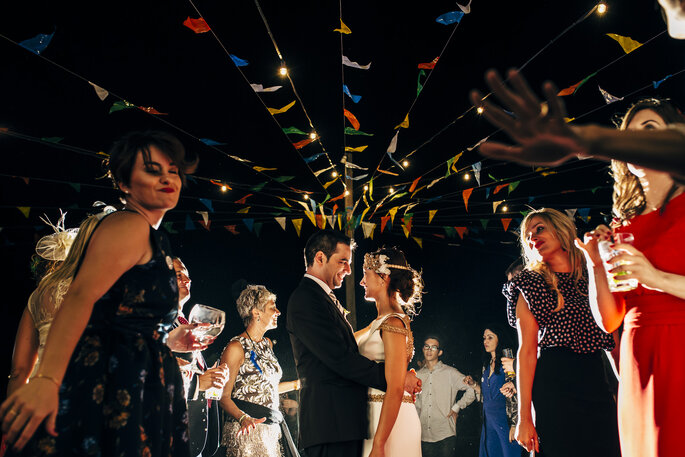 This generation has reinvented the traditional idea of marriage. Usually saying “I do” at a much later date, they are also not afraid to do it differently. Most have done away with the old traditions, but the ones that can’t let go have refined them to make them their very own. They play with styles, themes and follow their dreams. They recommend Instagram as a vital source of inspiration for their big day, however many take the DIY stance and use their imaginations. You’ll be sure to see all their original ideas on YouTube and blogs… as you can see technology and social media plays a major part. 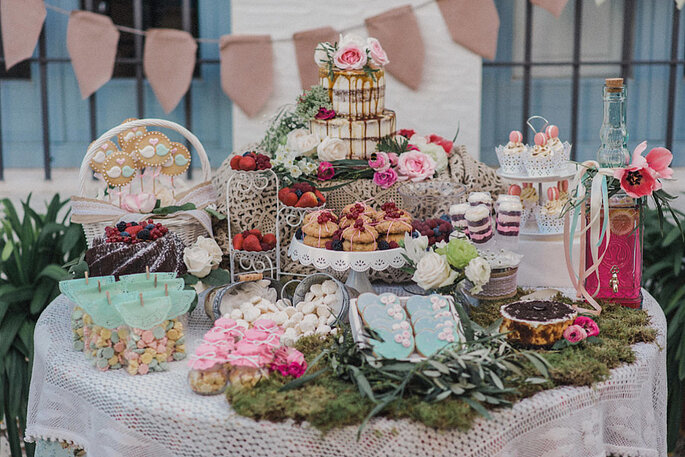 They are big fans of smaller weddings with close friends and family and the planning of the wedding; catering etc is usually done by their inner most circles. When possible they avoid the use of professional wedding planners as its important for them to be as involved in the day as possible. For them, the use of a wedding planner would be settling for the constraints of tradition that they wish to avoid and would defeat the point of a day meant to represent them honestly and entirely. They have the same attitude in relation to the photography of the wedding; the photographer most suited to the couple may not be the most well known or accomplished. They are eager to try those professionals who are under the radar and described as anything but mainstream.

Continuing with their trend of breaking from tradition, their menus stray away from what you would normally see at weddings. Couples strive for modernity with their choice of exciting flavours and ingredients, also because many millenials are veggies or vegans, meaning the food can be enjoyed by all.  Many use their favourite chef or make an arrangement with a frequented restaurant of theirs.

In our time we’ve seen weddings in concert forums, outdoor venues, restaurants and theatres- anything with a cool and different ambiance. Ideally these places are pre styled to perfection so there’s no need to spend extra money and time on the décor. They’d rather have a more exclusive guest list to be able to hold their wedding in the venue of their dreams. Take Gisella and Otto’s wedding at the Indie Rocks Forum for example! 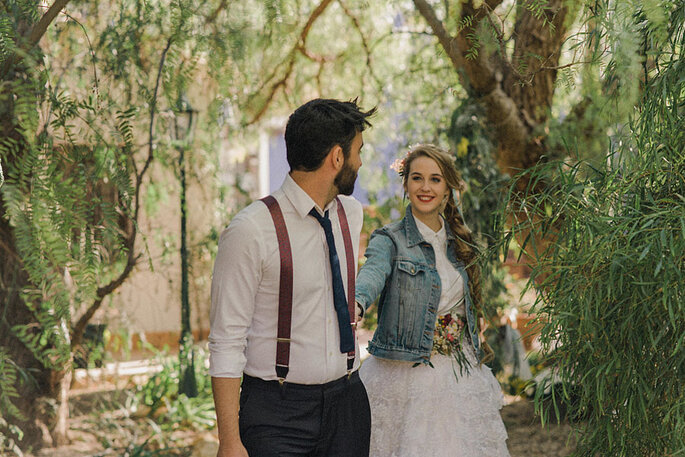 As we have already mentioned, millennials break the rules from start to finish. Not caring about following in their parent’s footsteps they strive for weddings that celebrate creativity and diversity. For example, the brides won’t go for the typical princess cut dress nor pure white colours but rather loud tones and bohemian styles. Picking unheard-of artists, their makeup and hair will make them no Plain Janes! 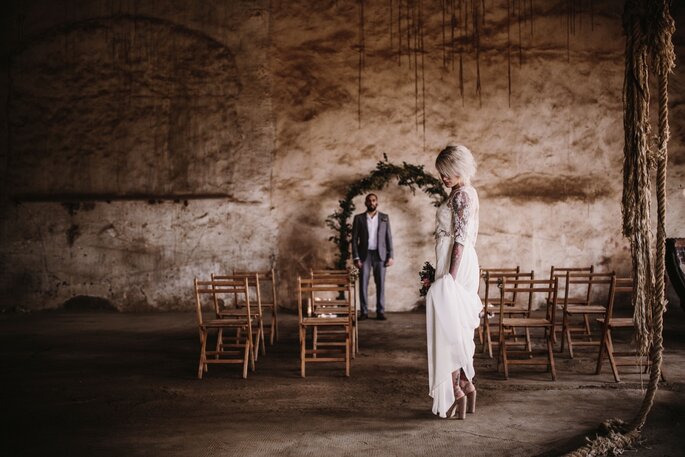 They go for simple and comfortable wedding dresses with inviting textures. They will never be OTT but natural, staying true to a look that represents them. The accessories are chosen for their sentimental worth. The boys go for a quirkier look, with colourful motifs, crisscross patterns and loud accessories. Hats and braces are usually staple features- these millennial boys are not afraid of anything.

However, those with a Mexican heritage are inspired by their own traditions, so we were surprised to learn from some girls that Mexican stylists designed their dresses. The dresses had bright colours, spectacular embroidery, but kept with tradition by maintaining the common reference to the natural world with symbolic motifs. Take a look at Karen and Pepe’s wedding in Oaxaca to see for yourself.

Informality is the new trend…

Millennial weddings are usually free from complications. Take the chilled and casual wedding invitations for example- they don’t pretend to be something that they’re not. The personality of the bride and groom should be omnipresent in the wedding from start to finish and that’s why they have original décor, a quirky venue, cultural music and many more surprises for the guests in store.

If you are between 20 and 35 then you are a millennial! Take advantage of your incredible roots and break the rules on your wedding day. Show off your awesome tastes and styles!

10 GIFs That Sum Up Life as Newlyweds