A year after the bombings of the Boston marathon, where 3 people lost their lives and hundreds were injured,  the athletes pounded the streets of the city again, this time… with a much happier ending.

On reaching the finish line some runners surprised their partners by proposing to them. This was the case for Carla, whose boyfriend had managed to get special tickets so that she could be in a special restricted area. Greg on approach to the finish line, found his girlfriend and down on one knee asked that all important question: “Will you marry me?”…to which she said “yes”. Greg had two objectives in mind, finishing the marathon in good time, and asking his girlfriend to marry him. 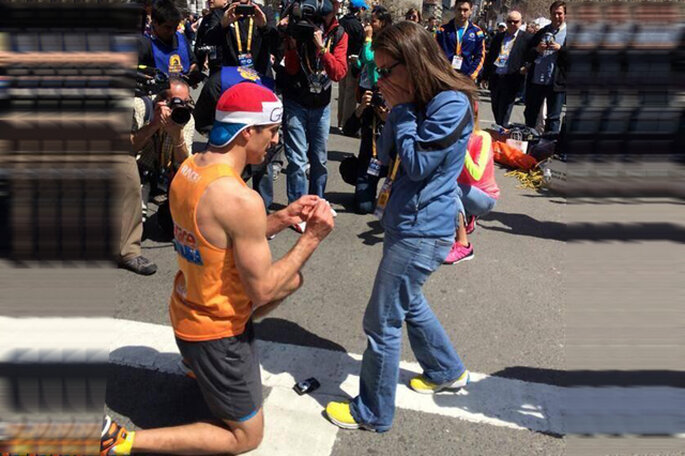 But they weren’t the only couple, as it seems the tragedy from the previous year had touched many hearts and many couples faced the reality of how short life can be.

John, an experienced runner, was running his 16th marathon when he proposed to his girlfriend Jodi as he got to the finish line… she too said yes!

#TOP5AT5: A Boston marathon proposal, a couple asks the internet to name their baby, and it’s Earth Day! pic.twitter.com/eKQG3fLsPK

Another “Will you marry me?” from Tom to his girlfriend Mary on the finish line.

Kendra, from New Jersey, was also surprised by her boyfriend Greg, who when finished the race, presented her with a stunning engagement ring.

But it didn’t only rain proposals on the day of the marathon. Brian, a runner from California, proposed to his girlfriend Shonra the day before the marathon in front of that all anticipated finish line.

This time the event was surrounded by romance, coming full circle from the tragic year before. Without doubt the wedding spirit was present that day. Would you like a public proposal? Share your opinion or experience on Twitter, @ZankyouUS

For more ideas, you can see a romantic surprise proposal in Central Park, New York by Luisa & Guillermo.

Proposing at New Year: How to Be Original On the Big Night

The proposal
Dec 31, 2018
The champagne is poured, you're wearing a fancy dress and the ball is about to drop - are you expecting him to get down on bended knee and propose? It's easy to see why New Year's Eve is a popular proposal day!

8 Top Tips for the Perfect Proposal

The proposal
Oct 25, 2018
Proposing can be a difficult task - where should you ask? When? What should you say? Guest blogger Kacey Bradley gives us her top 8 tips on how to do just this!

The proposal
Jul 27, 2018
So you're engaged (congratulations!), but where to even start?! Check out our six steps above to give yourself a good place to start planning the most important day of your life so far!

The 6 Top Places To Propose To Your Partner. Which Will It Be?

The proposal
Feb 12, 2018
Wondering where's the best place to propose to your partner? Take a look at these ideas for some inspiration!

5 Tips When Buying An Engagement Ring At Christmas

The proposal
Nov 18, 2017
A December proposal can be a wonderful holiday surprise… Before you get down on one knee and begin planning that dream proposal, work out your budget for that amazing engagement ring

The proposal
Apr 12, 2016
Luxury doesn't have to cost the earth - but you don't have to forsake a little sparkle in your life either! Here are our favorite fair trade gem companies.
50

The proposal
Feb 3, 2016
These show-stopping rings are just the bling needed to brighten anyone´s day!
10

The 10 Most Popular Wedding and Engagement Rings from Arabel Lebrusan

The proposal
Jan 16, 2016
Beautiful, unique, and ethically sourced! What more could you ask of a perfect engagement/wedding ring?