¡Ohhh!
There are no results that coincide with your search
Would you like to send a gift? Guest? Search for a wedding

¡Ohhh!
There are no results that coincide with your search
Would you like to send a gift? Guest? Search for a wedding

For your wedding I thought of a magical, elegant and certainly very different musical experience.

The Hang or Handpan are the latest instruments invented in the world with an ancestral yet contemporary sound at the same time. The vibrations and the sweet melodies will envelop you and lead you into soundscapes of rare beauty and depth.

I am used to stages of theaters and festivals around the world but I particularly love intimate and intimate concerts.

I like to take care of every detail of my musical intervention together with the spouses or the organizers to ensure the best possible experience during your ceremony and your party.

He has an emotional and instinctive approach to music.

Friello's music lends itself to the live experience and it is there that it releases all its strength and delicacy.

He has performed in numerous theaters including the laVerdi Auditorium and the Foyer of the Arcimboldi Theater in Milan, Parco della Musica in Rome, Teatro Verdi , Cine-Teatro Alfieri, Auditorium Sant'Apollonia and Sala Vanni in Florence, Teatro Duse in Bologna. , Teatro Camploy of Verona, Teatro Cristallo and Auditorium of the Sheraton Hotel in Bolzano, Forum of Bressanone, Teatro Convitto Nazionale Cicognini of Prato and Cine-Teatro Buonarroti of Civitavecchia.

He has participated in various Festivals and as a guest of numerous reviews all over the world including the Hang Loose Festival Hawaii , the Handpan Festival France , HangOut UK in England, Heart Culture Festival and Visionary Art Academy Vienna in Austria, Festival Atitlan and Earth Hour of the WWF in Guatemala , Piano City of Milan , World Music Festival in San Gimignano and at the Bhakti Festival, "Tiac" International Academy of Fine Arts, International Handicraft Exhibition, Symposium of Sustainable Universities, Conference "Winter is not coming" in collaboration with the WWF and the University of Florence , he performed at the RedFeltrinelli , at the "Meyer" Pediatric Hospital in Florence and at the National Institute of Multiple Sclerosis in Belgium .

He performed as an opening artist at the Concerto for Peace and Interreligious Dialogue in the main square of Florence, on the stage of Palazzo della Signoria.

He has also played at the HandpanHouse Germany, HandpanHouse Milan, Handpan Academy in Belgium , as a main guest at the Living Room sESSion in Switzerland and has held a series of Workshops and Concerts in Asia in Singapore, Latin America, the United States as well as in Europe .

Intimate and collected concerts, Concerts in a circle in the Woods , Full Moon Concerts, Concerts in the Dolomites , like the one at Santel's house (Trento) where the public came to listen to the hut after having walked a snowy path. It is often requested for Concerts at dawn as for the series of concerts on the beach of Punta Ala in front of the Tuscan archipelago held regularly in recent summers.

He studied at the Educational Music Academy in Milan .

On the occasion of Davide Friello's opening concert at the Verdi Theater in Florence during the world premiere of "Quarto Tempo Tour" by Maestro Roberto Cacciapaglia, the New Disc "IMMERSION" produced with Ema Edition and distributed worldwide by Believe Digital was released .

He has three studio self-productions to his credit, " Ritmatika", "Violin & Hang", "5 Elements" plus a Demo CD called "Confusion" produced in Thailand by the creators of the "The Pilgrimage" series for Sky TV USA .

He also collaborated, with the composition "Merope", on the album Room 2401 by pianist Giulia Mazzoni produced by Sony Music ; the album also features Michael Nyman , one of the world's leading exponents of minimalist music and soundtracks.

His compositions (often created ad hoc for the occasion) are used for short films, video installations and theatrical performances. His music was selected as part of the soundtrack of "Zitta - il Film" produced by the Tuscany Region and of "Viaggio nell'anima" produced by the Montecatini Film Festival .

He has played for various photographic and pictorial exhibitions and book presentations including "The dog, the wolf and God" written by Folco Terzani and hosted at the Waldorf School in Florence.

Davide was a guest in the Art Park of one of the greatest contemporary sculptors, Sauro Cavallini , with his charity concert for Cure2Children, active in helping children with cancer all over the world.

He had a experience of building Handpan in the laboratory of Meraki Instruments, among the best craftsmen in the sector in the world.

In addition to the activity of Concerts, it currently also offers Workshops and Masterclasses on Handpan .

He regularly conducts Sound Baths and Concerts-Meditation at various structures.

He collaborates with many Holistic and Yoga Centers and with Asmana Wellness Center, the largest wellness center in Italy, AlpenPalace, resort and Spa in Sudtirol, winner of numerous world awards as the best in the Wellness sector, with the Music Therapy Studio of Bolzano, "Nel Suono" Music Therapy Studio in Trento, "Na.Me" Bio-Natural Discipline Studies Center in Florence and played during various national meetings of Siaf Italia, a trade association of holistic operators. He regularly collaborates with the Artedo Schools of Arts Therapies in various parts of Italy.

By francescamerlina
March 22, 2021
5
I used their services for my wedding
translate

I was asked to leave an impression on Davide who played at my wedding which was held at the Castello dell'Acciaiolo in Florence ... Davide is a wonderful musician! I hired him to bring us his splendid music after meeting him at one of his concerts at the "Tiac" Academy of Fine Arts. What can I say .. it fully satisfied us ... my parents and all the guests appreciated it very much.

Davide was accompanied by a beautiful and talented cellist who added even more elegance and magic ...

By luxuryevent
March 19, 2021
5
I know them professionally
translate

As an Event Manager of luxury weddings I have often worked with him in Tuscany.

I have proposed Davide's music several times to the newlyweds both for the moment of welcoming the guests in the villa and during the ceremony. They have always been fascinated and satisfied. Then the instrument that plays divinely is truly magical ... it is as if it were floating in a world of poetry.

I had already seen Davide in concert at the Arcimboldi Theater in Milan and I was very fascinated.

He is also very nice, helpful and super professional

By Lauraingrosso
March 18, 2021
5
They provided a service in a wedding at which I was a guest
translate

In 2018 I had the opportunity to listen to Davide at a wedding of two dear English friends at the beautiful Castello di Vincigliata in the hills of Florence. I was very impressed by his way of touching the curious instrument and his professionalism. The melodies he played were very deep and lightened the air ... all the guests who gradually arrived were impressed. He was also very elegant and the visual impact of his toolset was beautiful !!!

What services do you offer?
ceremony music, party music

What styles of music do you offer?
classical, Chill Out

Do you charge by the hour or per event?
By event

Is there a charge for travelling to other places?
Possible travelling expenses

How long has your business been running?
2010 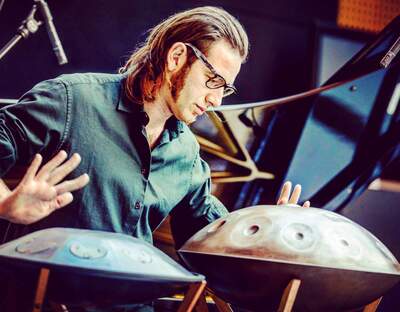 Usually responds in under 24 h

Davide Friello Music For Handpan: The Musician Who Cannot Miss Your Wedding

Music and animation
Feb 28, 2021
Discover the emotional music of Handpan with Davide Friello! Choose the perfect music for your wedding.
Related tags: